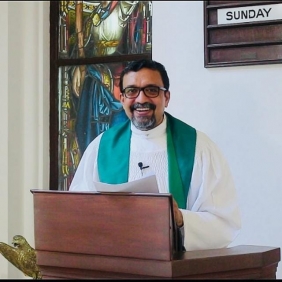 In a cricket-crazy nation, the XXXII Olympics currently underway in Tokyo, Japan, has once again brought the focus on Olympic events like hockey, wrestling and boxing. Media have been reporting how most of these sportspersons have struggled for years in order to win laurels for our nation. Their lives are a testimony to what grit and endurance can accomplish.

The Isthmian Games at Corinth were second in importance only to the Olympic Games. The Christians in Corinth would have been familiar with the Greek Olympic Games as well as the local Isthmian Games. Knowing this, Paul uses them to bring out his point that the Christian life demands tenacity as the Games do. The rules were extremely exacting. For several months and years, the athletes are subjected to the most rigorous training and self-discipline. Without discipline, an athlete cannot win the prize. “Discipline means giving up the good and the better for the best,” says Warren Wiersbe. The athletes must follow a strict routine of diet, exercise, practice, and rest. They keep their bodies under control and keep their eyes on the goal. They would, for instance, turn down invitations to late-night parties. Not that there is anything wrong with food and fun. But, if they would interfere with your highest goals, it is wise to decline. Paul points out that the Christian life makes equally stringent demands. Paul had to discipline himself. If we want to serve the Lord and win his prize and approval, then we must be willing to pay the price.

The most coveted honour in the Greek world was the crown of laurel or parsley. The competitors considered it worth any extent of discipline and self-denial. But it was corruptible and transient. Its value lay in the honour it represented. But it soon faded. “They do it to get a crown that will not last, but we do it to get a crown that will last forever.” Do we count it worthy to discipline ourselves, and to walk in obedience to God with courage and determination, in order to win the approval of God? Are we willing to sacrifice immediate gains for eternal rewards, and immediate pleasures for eternal joy?

St. Stephen's celebrated its centenary on 26th December 1953 with much fanfare. Until then there had been no electric lights or fans. They were installed during this time.